I am a healer. I have many psychic abilities, as do most people, and the biggest one, the most dominant one, is being a healer. I always try to put that forward in everything I do. I have struggled these past few weeks trying to maintain a good attitude and not allow myself to swallowed up by the fear and panic that I have felt from so many, especially since we have been locked down. It has only been a short time but for someone from Montana with a Gypsy soul it feels like a lifetime.

I miss people, and I miss touching people. I  died because one of my best friends said she was self quarantining because her daughter works at the grocery store, the same one I was just at. I miss hugs, though thankfully I have found people who will still give them. I miss play practice and seeing everyone bloom into wonderful personalities as their characters bloom and come to life. At this time I don’t even know if our play will be performed. I sure hope so!

I have been spending the time we are in quarantine at my sister’s attempting to help with lambing. For anyone who doesn’t know, that’s when sheep are giving birth and sometimes lambs need a bit of help either coming into the world or thriving in it. Most of the time I have felt like I haven’t been doing much but a few times now I have gotten to use my healing gift and at least channel through my soul lives to figure out what to do in a situation or to help a lamb stay alive. One of the lambs was giving up and not thriving. Donna brought him down and we put him in the sink where we could put hot water bottles under and around him to warm him up. We both were rubbing on him for a while and then she decided she’d better go check on his twin and the ewe. I had started singing a little but I was resistant. My gift goes for the highest and best and sometimes that means helping things die. My sister was already stressed and I didn’t want this lamb to die on her.

The thought popped into my head that I used to ask my coven sisters for help in past lives for these things, so I reached out to others. I texted one hoping that my text would go through in the land of little service and it did. I texted two who are sisters and they said they would post on our Facebook group. I felt them all come in energetically as I sang and kept moving his head around. He bleated! That was the first sound he had made and a real sign that he had decided to live. He began to hold his head up on his own and even started to suckle my finger. 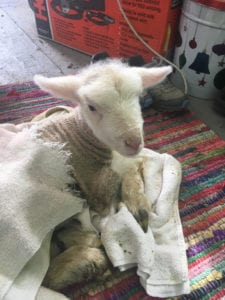 I was so happy I wanted to run up and get Donna right away and tell her! It seemed like forever before she got Barack to the house so that I could. Another friend who was a rancher sent advice and we took it. We had him back out with his momma by the end of the day but she wouldn’t let him suckle from her, so we are going to be bottle feeding him for a while, which is my job when Donna goes back to work.

I had been having a hard time feeling like I should be doing more. Since all of this started I’ve barely had any work and I had rather lost my sense of purpose. I felt completely useless really. I didn’t want to feel that way, so I was unconsciously trying to find a boyfriend because that gives me purpose. My purpose is to take care of him, right? WRONG! My purpose is to be the best ME I can be. That would include reaching out to people all over the United States as I always have, bringing light into darkness, building up individual people and helping them shine, and apparently now calling in sisters to save a bum lamb.

In these trying times, if you think you have lost your sense of purpose, please ground yourself, take a bath or do something, alone, for you, and realize that you are important! Especially to yourself because who is going to take care of you and all the rest if you’re not available? As with everything, it circles around, a beautiful fractal to be treasured. Happy Ostara and Happy Easter!!!

"Wow! Initially coming into contact with Marcia she provided a familiar level of comfort. With her easy down to earth cheerful personality I immediately felt at ease. Her welcoming spirit encouraged me to open up and experience the level of healing she offers. When I tell you that I only want her gracious healing hands to touch my aura I mean that lol! I know healing hands when I experience them. Marcia not only has healing hands but she embodys the vibration in her whole being. From the top of her head, through her hair strands in her beautiful voice when she sings away the blockages that hold you back, all the way down to her feet that remain ever so grounding through the healing process. She opened up my heart and my heart can breathe again. As tears of cleansing released from my eyes I was filled with gratitude, immense gratitude I should say. Marcia the Don is a top tier healer and energy cleanser! If you haven’t booked a session you better book now because you wouldn’t want to wait!
Jasmine W.
I had an Astrology reading with Marcia today and had one of the best experiences. She explained the content that she was delivering and made the experience a very positive one! She focuses on an individuals strengths and empowered me to focus on those strengths to pursue my dreams in a more uninhibited manner. I am extremely grateful for the experience and encourage anyone interested in finding an answer(s) to their questions to ask Marcia for insight!
Drew Paul S.
Marcia sang and sent some of her mountain magic energy to me last night. It was amazingly calming. I could hear the wind at times and that energy was so pure and it really calmed me down and helped me recenter. It felt so connected to Mother Earth. Thank you for sharing that energy with me as well as yours Marcia! You are a special fairy. Love having you in my life! <3
Melissa Rippe, Psychic
Marcia used her natural intuitive abilities and musical tones to unlock some long-ago pent up imbalances. She has a completely unique method to reaching and syncing the sounds of old that can affect your cells today. Most of all - she does all of this with an absolute intention of bringing light, raised energy and healing to you. Thanks Marcia!
Amy G.
I met Marcia serendipitously and heard her sing and perform Reiki on someone's shoulder. She helped me ground into myself to make an important decision. I had been so tense, I couldn't 'get real with myself' and she helped me cleanse and helped me to center with her singing. And the second time she helped me find damage from another lifetime that was connected to people in my life today so that I was able to consciously forgive those events.
Marylin E.
Marcia incorporated her soothing celtic toning and song into a relaxing massage for me. It was very calming and rejuvenating at the same time. Keep singing goddess... <3
Sandra D. W.
Have had two sessions with her. Both were wonderful!
Debra L. W.
I have been dancing for about ten years. I thought i just couldn't lift my left bicep to touch my ear because of not flexing that arm enough. Marcia did a session and saw a vision from another life of mine where I had an injury from jousting. I had no memory of this life like I have memories of other past lives. But I got up and I could touch my inner bicep to my ear and I still can. Really cool.
Marylin E.
Previous
Next
Facebook Instagram Youtube Compact-disc